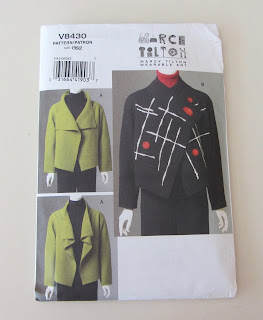 I have had this pattern for a long time and have been going to make it. Marcy says this has been her most popular pattern. 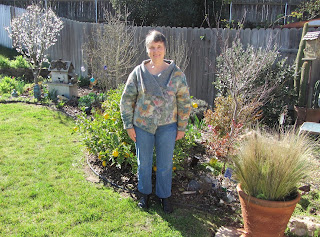 This is a piece of fabric that I got from Marcy. It is two sided with the print on one side and grey on the other. The fabric pattern is so beautiful. It has some wool in it. I cut the front pieces so the selvage came along the front edge. 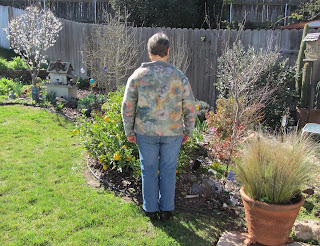 I had a problem with the fabric rolling so I put a grey knit trim on the edges. It helped some but it has a mind of it's own. It actually looks quite fine with the roll on the collar area. I am enjoying wearing it. I will be leaving next week for the Sewing Expo and I think this will be one that will keep me warm while in Washington.
Posted by Jonadele Fashions at 11:00 AM No comments: 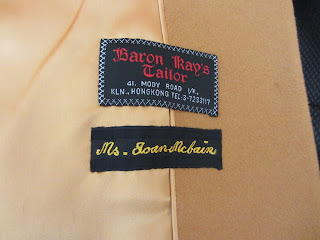 I thought you would like to see a little of the inside of the jacket. These are the labels that they put in the jacket. 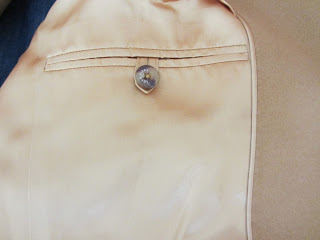 It is a really nice satin lining. You can see the line of piping that they put in along the facing and a nice inside pocket. 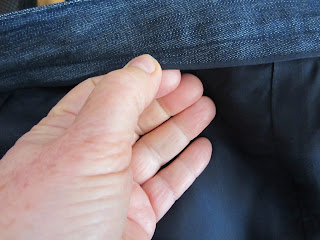 The pants were lined and a nice binding on the waist band.
Posted by Jonadele Fashions at 9:36 AM No comments: 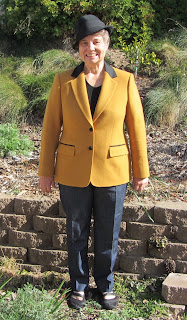 One of my dreams had been to have a jacket made in China when I made my recent trip. When my Mother went some 45 years ago she had a coat made and the workmanship was beautiful. I learned that the labor in China is not that cheap anymore. It is still reasonable in comparison to the United States, but not like it used to be. The cheap labor is in Taiwan and Vietnam now. This jacket is cashmere wool and I think they did a beautiful job of fitting. It took three days for them to make the jacket and pants. You can see in this picture that pocket has the lapel out. 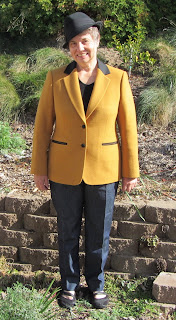 On this picture I have the pocket lapel tucked in. The buttons are covered. It is lined in satin silk.

I also had the pants made out of cotton denim. I was thinking I was going to have a pair of American blue jeans made and when I asked if they could make some back pockets with sequins and beads they said that was too much work. So these pants are made more like a man's suit pants and fit very well. 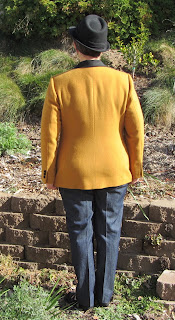 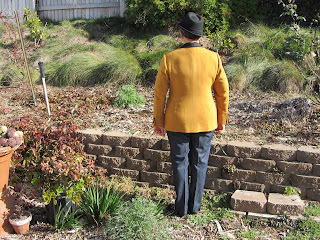 I also had two pair of shoes made. They measure your feet and design them the way you want. I haven't received those yet. They said it was going to take four months. They were telling me that they only had ten men that made shoes and they were getting near 65 years old and the younger generation wasn't interested in learning. So it sounds like that art will be lost soon.
Posted by Jonadele Fashions at 1:00 AM No comments:

Check out my Etsy Page

Jonadele Fashions
I am interested in wearable art. I am a member of PenWag a wearable art group in the San Jose, CA area. I enjoy dyeing fabrics, manipulating fabrics and teaching classes in it. When I am not doing that I enjoy gardening. I live in Orcutt California on the Central Coast.